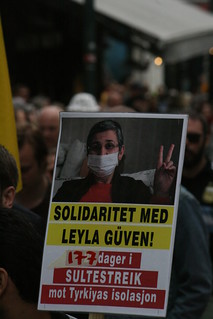 The unabashed crackdown on democratic politics goes on full force in Turkey.  On 4 June 2020, HDP deputies Ms. Leyla Güven and Mr. Musa Farisoğulları and CHP deputy Mr. Enis Berberoğlu were stripped off of their parliamentary mandates and imprisoned.

Although Ms. Güven and Mr. Farisoğulları had parliamentary immunities after being elected as MPs in 2018, the court cases against them were not suspended and continued. On 24 September 2019, the Supreme Court of Appeals upheld their prison sentences: nine-year prison sentence for Mr Farisoğlulları and six-year prison sentence for Ms Güven on terrorism related charges. These sentences were within the context of the infamous witch-hunt called the Kurdish Communities Union (KCK) main case, which started after the victory of Democratic Society Party (DTP – one of HDP’s predecessors) in 2019. Then 154 Kurdish politicians were prosecuted, among whom were the then co-chairs of Peace and Democracy Party (BDP), its deputies, mayors, municipal council members, human rights defenders, journalists and intellectuals. On 28 March 2017, the Diyarbakır 2nd Assize Court sentenced over one hundred Kurdish politicians in the KCK case.

Mr. Enis Berberoğlu is the first CHP deputy who last his parliamentary mandate; he was previously sentenced to five years and 10 months in prison in 2017 on espionage charges for providing the daily Cumhuriyet with some visual material showing Turkish intelligence officers unlawfully sending truckloads of weapons to its proxies in Syria.

This putschist crackdown on parliamentary democracy has a long history in Turkey. In 1994, Kurdish deputies of Democracy Party (DEP) had also lost their parliamentary mandates. Since then, at least 27 deputies committed to the democratic political tradition pursued by the HDP have lost their seats. More recently, in November 2016, HDP co-chairs Mr Selahattin Demirtaş and Ms Figen Yüksekdağ and several deputies were arrested; seven deputies are still in prison. With these new arrests, the deputies in prison increased to 10; 9 HDP deputies and 1 CHP deputy.

The government’s unlawful attacks are not simply directed against parliamentary democracy. Turkish government has also been unlawfully removing HDP co-mayors in Kurdish provinces and replacing them with appointed “governor-trustees.” Since the local elections held on 31 March 2019, the government has unlawfully seized a total of 45 HDP-run municipalities out of 65. Additionally, 6 HDP co-mayors who had won the elections were denied their election certificates with the excuse that they had previously been dismissed from their jobs by emergency rule decrees. As of 5 June 2020, 21 HDP co-mayors elected in March 2019 and at least 27 Kurdish mayors elected in 2014 local elections remain behind bars.

These new arrests are the harbinger of more state repression as the country further sinks into a devastating economic crisis and political instability under pandemic conditions. The HDP will meet this aggression of the Turkish government to totally wipe out the democratic opposition with promoting a more organized and resistant democratic struggle.

This talk is dedicated to the Kurdish freedom movement, and will be led by Dr Dilar Dirik, Kurdish activist and Oxford University Research Fellow, who has both worked in and written about the Kurdish Women’s movement.

How does covid-19 affect the Kurdish freedom movement? What strategies are the best to meet the challenges during this difficult time?

The talk will be held in English and everyone is welcome to join. Please e-mail solidaritetmedkurdistan@gmail.com to get the zoom-link. We will send the link the day before the meeting.